13-year-old boy with a complicated past medical history presented with dysphagia. His course began in infancy with severe gastroesophageal reflux symptoms. Throughout his childhood he continued to have symptoms of reflux and difficulty with swallowing and had Nissen fundoplication followed by two revisions along with a hiatal hernia repair complicated by esophageal perforation. At the age of 11 years he redeveloped a hiatal hernia and again underwent surgical repair of the hernia and revision of the fundoplication. He had a gastrostomy tube placed as well as a central intravenous line for long-term parenteral nutrition which were subsequently removed. An upper endoscopy demonstrated two esophageal diverticuli.

At this point, the patient transferred care to our institution. He was found to have a gastro-peritoneal fistula and abdominal abscess and underwent surgery to close the fistula. One year prior to the current presentation he underwent takedown of the fundoplication due to dysphagia symptoms which provided significant improvement allowing him to eat regular diet. Three weeks prior to this presentation he first developed dysphagia for solids, which then progressed to liquids, too.

To evaluate his symptoms, he had a contrast upper gastrointestinal series performed: 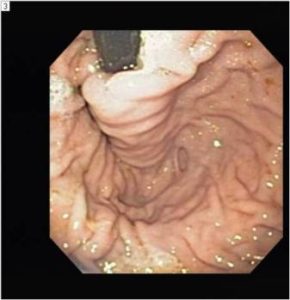 Hiatal hernias are classified based on the location of the gastroesophageal junction (GEJ) and the extent of stomach herniation. Type I hiatal hernias are sliding hernias with the GEJ located in the posterior mediastinum. Type II hernias are "classic" paraesophageal hernias with the GEJ in the correct anatomic position and the gastric fundus herniating along side the distal esophagus. Type III hernias combine features of type I and II with the GEJ positioned upward and the fundus along side the esophagus. Type IV hernias involve displacement of stomach and additional organs through the hiatus into the mediastinum. Types II, III, and IV collectively represent the clinical spectrum of paraesophageal hernias (PEH).

PEHs typically result from weakening of the diaphragm and the supporting ligamentous structures. Chronic increased intra- abdominal pressure and previous surgeries in the area, such as reflux surgeries like fundoplication are primary risk factors. In adults, the literature reports 5% of hiatal hernias are PEHs, while the incidence in children is undefined. The clinical presentation ranges from being asymptomatic, with identification of the hernia made on testing for other reasons, to those with upper GI tract symptoms of pain, vomiting, heartburn, dysphagia, or early satiety. Rarely, but important to consider, is the presentation of abdominal catastrophe with incarceration of the gastric fundus above the hiatus or a gastric volvulus.

Identification of a PEH may occur on routine chest radiograph with a gastric bubble identified in the chest. If suspected, the most useful test is the upper GI series which demonstrates the location of the GEJ and the relationship of the esophagus and stomach to this position. On upper endoscopy, a PEH may also be seen on a retroflexion maneuver allowing for further detection of this anatomic relationship. As seen in the endoscopic image/video, a separate outpouching of the fundus protruding upward adjacent to the GEJ is highly suspicious.

The Association of Pediatric Gastroenterology and Nutrition Nurses

Journal of Pediatric Gastroenterology and Nutrition

The information provided on this site is intended solely for educational purposes and not as medical advice. It is not a substitute for care by a trained medical provider. GIKids is not engaged in the provision or practice of medical, nursing, or health care advice or services. For advice about a disease, please consult a physician.

Established by the North American Society for Pediatric Gastroenterology, Hepatology and Nutrition (NASPGHAN)